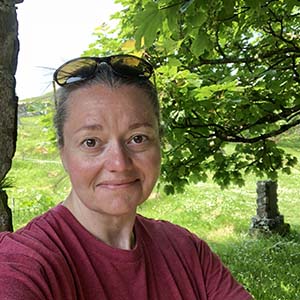 "Financially, it was way better than anything else that I found, anywhere. I’m paying out of pocket. I don’t qualify for financial aid. If you’re paying as you go, it’s nice for the pocketbook to find such key credit hours, but the courses are really good."

Candy Spurling began her quest for an online bachelor’s degree through Oregon Institute of Technology (OIT) in Klamath Falls, Oregon, in the spring of 2017. Unfortunately, the school did not offer enough online general education courses for her to finish.

After a month of internet searching, Spurling located the Self-Paced Online courses webpage at the University of Arkansas, where she found three general education classes that would transfer and let her earn her bachelor’s in respiratory care. From the U of A’s online self-paced catalog, she selected Children’s Literature, Theater Appreciation and The Indigenous Peoples of North America.

Spurling, a respiratory therapist in Chattanooga, Tennessee, completed her coursework for all three classes in about four months. The three classes transferred, making it possible for her to graduate from OIT in June 2020.

“I work three days a week, three twelves on night shift, and (the classes) were perfect,” Spurling said. “Having the staggered start dates was really helpful. That way I could overlap and have different end-of-term dates and such. It fit in perfectly with everything.”

One key reason she chose the U of A was the ability to study at her own pace. Knowing the end dates of the courses, she could work in advance then take a break, she said.

“I could pick it up and do it whenever and wherever,” she said. “If you have a little break at work, you can take your iPad and at least do some of the reading materials and things like that. It just fit everything that I needed.”

Spurling had no problems with the course software, and said she was able to communicate with her instructors.

“The professors were all very responsive,” Spurling said. “I never had any trouble waiting on people to respond to me when I had questions about anything. At my other school, I sometimes I would contact instructors and not hear back for, like, two weeks. I learned from all of them and I really enjoyed them. They expected things and I learned.”

Another draw for Spurling was the price. The cost per credit hour is half of other, more famous universities, she said.

“Financially, it was way better than anything else that I found, anywhere,” Spurling said. “I’m paying out of pocket. I don’t qualify for financial aid. If you’re paying as you go, it’s nice for the pocketbook to find such key credit hours, but the courses are really good.”