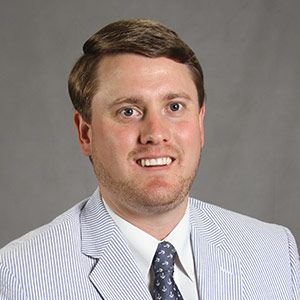 "I really was able to work at my own pace and kind of pick and choose the classes that I thought were the most relevant for my position."

For Jackson Alexander, mastering agricultural skills was not enough. He wanted to learn how to teach those skills to other adults. And he did, by earning an online master's degree in Adult and Lifelong Learning in May 2017.

Alexander is a program specialist for Adult Volunteerism and Leadership in the Cooperative Extension Service in Little Rock, which is part of the U of A System Division of Agriculture, Research & Extension. His job is to teach and train volunteer leaders who work with approximately 150,000 youth in 4-H programs in all 75 counties in Arkansas.

“In that role, I thought it might be beneficial to learn more about working with adults and adult learners,” Alexander said. “I started looking at some online programs, and I came across the Master of Education in Adult and Lifelong Learning. I spoke with Dr. (Kenda) Grover, and she really sold me on the program.”

Alexander, who already had a master’s degree in Agricultural and Extension Education from the University of Arkansas, began taking ADLL classes to learn how to do his job better.

“I really was able to work at my own pace and kind of pick and choose the classes that I thought were the most relevant for my position,” Alexander said. “They allowed me to mold the degree into what I wanted to fit my interests. Even though I was an online student, I felt as though I had just as much interaction with my professors as I did when I was on campus the first time.”

Alexander said it was an interesting transition, going from an academic to an application-based program, like the master’s program in ADLL. The program revolved around one key question: what could he do in the classes that he could apply directly to his career?

“The professors showed a genuine interest in what I do and how [ADLL coursework] can help me in my career,” he said. “Having professors who cared about what I was doing, who said, ‘Let’s build a program that you’re going to actually get something out of rather than just a piece of paper’ was really important to me.”

Some of his ADLL peers were traditional adult educators, like those who help adults earn the equivalent of high school degrees through General Education Development. Many others, however, worked in a variety of other professions and, like Alexander, found that part of their responsibilities was to teach or train adults.

The online program also gave Alexander time to study alongside his wife, who is in law school. He could spend time with her yet still move forward with his coursework, something that would be hard to do had he attended face-to-face classes on campus. Alexander’s hard work earned him the University of Arkansas Adult and Lifelong Learning Program Outstanding Master’s Student Award in 2017.

Alexander believes there is long been a misconception about online programs.

“Now that I’ve been through [an online program] and I’ve earned the degree—and I say earned, because I did—I think without reservation that there is so much value in this program, because it is convenient, because it is rigorous, because it develops so many critical thinking and application skills that people will need in whatever career they might have.”

Much like the ADLL program is focused on lifelong learning, Alexander feels like a lifelong learner and has a passion to always discover something new. In the future, he’s considering going to back school to obtain a Ph.D. in public policy, administration, and affairs. Alexander is passionate about rural development, and he would like to have a better grasp of how policies are shaped, how laws are made, and how these policies play a role in a variety of arenas. Specifically, he wants to investigate the intersection of agricultural and natural resource management, food production and security, continuing education initiatives, and social justice policy to see how these avenues detract from or add to the vitality of rural economies and communities in rural areas.

“All across the south, you see states who lag behind in education, infrastructure, and social programming, and I think so much of that starts at the policy level and the political level,” Alexander said. “I think my degrees, coupled with the potential for a policy-focused education, can really move me into that arena.”