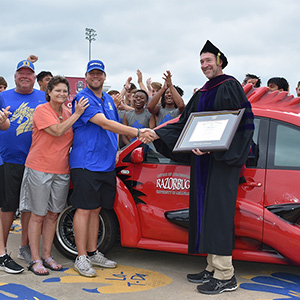 "It felt right to me. I felt like it would give me something more against other people who wanted to do the same job as me as a P.E. teacher or just as a teacher in general. Having that master's program in kinesiology and physical education, I felt like benefited me the most in the long run."

Coming from a family of coaches, Jacob Qualls can't help but be a little bit competitive. He believes earning a master's degree online from the U of A may give him an edge in hiring decisions in the future.

"I always joked that it's the only thing I know how to do, which hopefully it's not, but if it is, then I'm proud of it," Qualls said of coaching. "My dad and my mom were both longtime high school coaches in the state of Arkansas."

Qualls was joined Aug. 4 by his father, Hal Qualls, a high school football coach; his mother, Jeannie Qualls, a retired high school basketball coach; his younger brother, Judd; and the DeWitt Dragons football team for a stop on the Razorbug Diploma Tour. Jack Kern, professor of physical education, presented the May graduate with a framed diploma for his master's degree in physical education in front of the football field.

The Razorbug Diploma Tour traveled through the rice, cotton and soybean fields of eastern Arkansas on its fourth day, which threatened rain and delivered sweltering temperatures across the state. After the presentation, the Dragons cheered and called the Hogs to celebrate Qualls, who teaches eighth-grade science as well as being on the high school football coaching staff.

U of A faculty and staff also traveled with the Razorbug through western and south Arkansas in June and July to present framed diplomas to graduates of online degree programs. More than 440 students graduated from online programs in May. The Razorbug is a converted red Volkswagen Beetle that sports a Razorback snout, tail and razor-edged spine. It has been used for recruitment and special events since 2005. 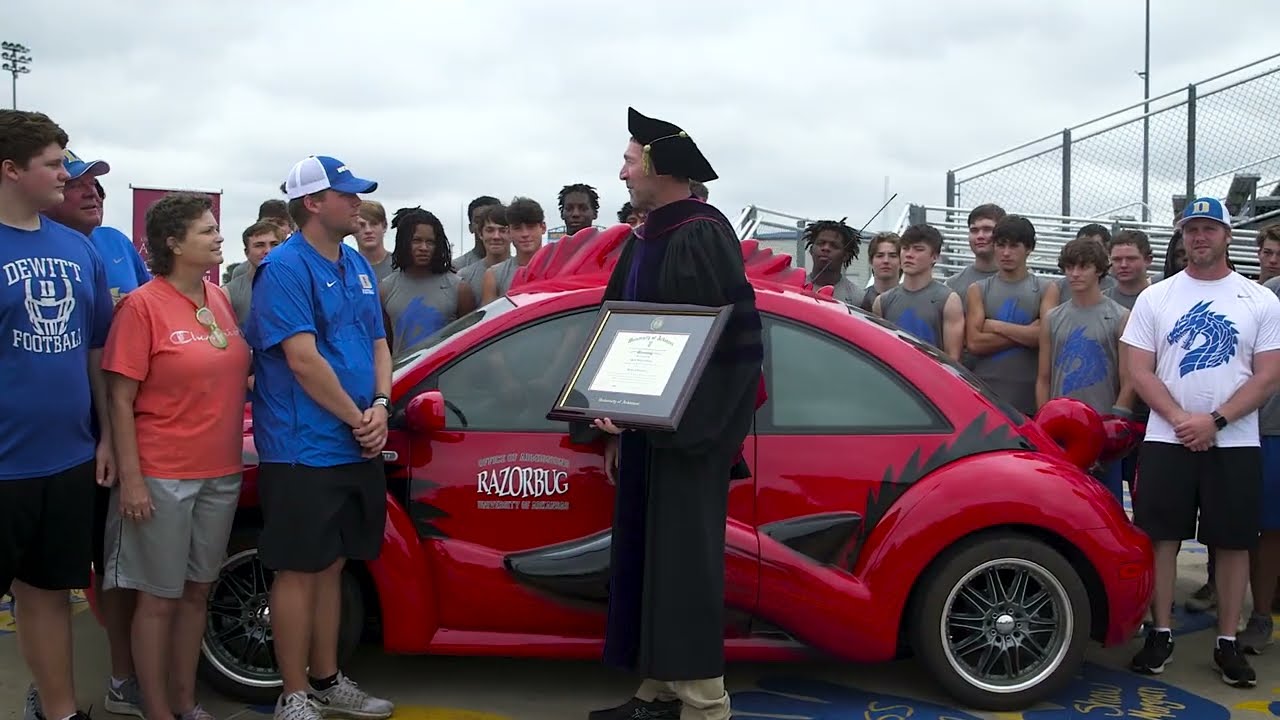 Jacob Qualls receives a framed diploma from Jack Kern, professor of physical education, during a presentation Aug. 4 on the Razorbug Diploma Tour.

Earning a master's degree online was the best choice for him while working as a teacher and coach, Qualls said later inside the humid, metal-framed practice gym.

"It felt right to me," he said. "I felt like it would give me something more against other people who wanted to do the same job as me as a P.E. teacher or just as a teacher in general. Having that master's program in kinesiology and physical education, I felt like benefited me the most in the long run."

Qualls also had grandfathers who were coaches, and he and his older brother both played quarterback when each attended Rogers Heritage High School in Northwest Arkansas. His older brother, Josh, coaches football at a small college in Tennessee.

Talking about his parents, Qualls said, "They were well-known, and one of my favorite things growing up was walking into a Walmart in Fayetteville, Arkansas, and somebody coming up and saying, 'Coach Qualls.' They knew my dad or they knew my mom, and I thought that was special. It's really the reason why I wanted to get involved with coaching."

Earning his undergraduate degree from the U of A in the on-campus kinesiology program also gave Qualls a boost during the online graduate program, he said. Kern was a familiar face because Qualls had taken Kern's courses in the bachelor's degree program.

"When I did come into a situation where I really didn't understand what I needed to do or what they were asking me to do, I felt like the professors, yourself included, were very helpful communicating with me through email, phone calls," Qualls said to Kern at the diploma presentation. "I felt like it was really easy to just kind of get with y'all and get help with what I needed."

Qualls was surprised to interact with other students as much as he did online, he said, mentioning his connection with an early career teacher and coach in Washington state.

"Because I was in the physical education master's, the people around me wanted the same thing, and they were kind of looking at the same thing, whether they were going to be coaches, already were coaches or were former athletes," he said. "It was kind of all what I enjoyed doing myself, so it was easy to interact and get to know people better, whether they lived in Arkansas or they lived in Washington. I thought it was really cool."