Student:  Ed.S. in Curriculum and Instruction 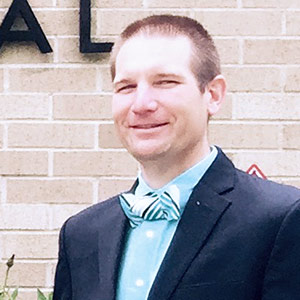 "Every day, every class I've gone to, there's always something I can take away that I can apply right then and there to my professions."

Zachary Palombo is a father of three, the Supervisor of Academic Achievement for his school district in New Jersey, an ocean lifeguard and a student in the University of Arkansas’ online Educational Specialist in Curriculum and Instruction degree program. His many responsibilities were a factor in his decision to study online.

“Any administrator will tell you that they really don’t have time to go back to school and take on-campus classes,” said Palombo. “I have three kids at home, too. The online Education Specialist in Curriculum and Instruction program lets me pursue my career goals without putting a hindrance on my family.”

Another factor that influenced Palombo’s decision to study online was his learning style.

“I’m more of an independent learner,” Palombo said. “Studying online is a non-pressure situation. I can dictate the time that I need to for my classes. It’s more of a professional learning setting and a more relaxed atmosphere. I’m fully engrossed in all the things I’m being taught. This is making classes way more fun for me.”

Palombo said that his decision to study with the U of A was influenced by program curriculum, diversity and affordability.

“I was admitted to programs within my own state,” said Palombo. “However, the programs weren’t really geared toward what I wanted to pursue. I want to be a behind-the-scenes person in a school district, an educational coach for teachers as we’re going through state reforms.”

According to Palombo, the online program’s curriculum is a perfect fit for his needs. He has been able to apply what he learns in his online classes to benefit both his school district and his lifeguard training duties.

“It’s so catered toward my career,” said Palombo. “Every day, every class I’ve gone to, there’s always something I can take away that I can apply right then and there to my professions.”

The geographic diversity of his classmates has been an asset, according to Palombo.

“It’s great to find out what’s going on in different parts of the country,” he said. “I’ve gone in a totally different direction thanks to feedback from some [of my classmates].”

Beyond his personal career goals, Palombo says that the program is also helping the teachers with whom he works.

“It’s more than just my selfish career ambitions,” he said. “It’s really helping all of the people who are working under me in my district.”

Palombo reported that he is pleased with the availability of his online professors.

“Dr. Mears has been really great at guiding me for my classes,” said Palombo. “He’s very accessible on a regular basis through email, or a phone call away.”

According to Palombo, the online program could benefit a variety of students.

“I would recommend this program to anyone who is looking to be a teacher, coach, or involved at the district level,” he said. “Anyone who wants to strengthen their teaching skills in the classroom and anyone in charge of professional development for educators could benefit from this program.”

Palombo says he truly feels part of the Razorback community.

“I’ve become a Razorback fan on Saturdays,” he said. “It’s given me something to root for, too!”

Palombo is on track to graduate in 2017.