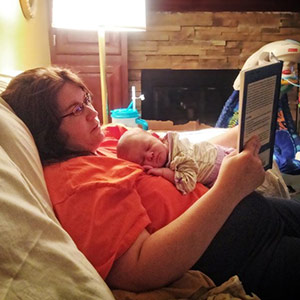 "The best career advice I have to give is to take advantage of those industry opportunities and get to know your professors."

Five years ago, Amanda Yotty was a single, ambitious full-time employee at ConAgra Food Inc. in Macon, Missouri. Since then, she earned a master's degree and became a wife, a mother of two, and a regulatory manager.

"I wanted to earn a Master of Science in Food Safety because I knew it would catapult my career by helping me to understand and apply concepts related to the position I was in, as well as future positions within the food safety career trajectory," said Yotty, who now lives in Iowa. "I didn't want to go the traditional route, because that would mean interrupting my career."

Studying in the online master's degree program from the Dale Bumpers College of Agricultural, Food, and Life Sciences did not deter her from getting married, having two children and climbing in her career. She did it all and received her master's degree diploma in August 2015.

"If this program had not been available online, then I would not have been able to earn my degree," Yotty said. "During the time I took to pursue this degree, I had a family to tend to, in addition to work responsibilities."

Studying online allowed her the flexibility to combine her education and her life, she said.

"I could take time to work on my studies on a weekend, over the lunch hour, or late at night after the kids went to bed," Yotty said. "One of my favorite pictures is my first child as a newborn curled up on my chest while I studied my food toxicology textbook."

The program also fit her budget.

"The U of A was the most economical choice and had an awesome reputation in industry," Yotty said.

Online learning also provided mobility. While studying online, Yotty moved from Missouri to Omaha, Nebraska, to take a food scientist position. She then moved to Plainfield, Illinois, to take on a new position as a food safety specialist.  Finally, she moved to take a position as regulatory manager in animal feed for Kent Nutrition Group in Muscatine, Iowa.

Yotty learned about the online master's degree program from John Marcy, a Division of Agriculture Cooperative Extension professor and poultry processing specialist. Yotty met Marcy during an introductory Hazard Analysis Critical Control Point course she took for professional development, a requirement by her employer at the time.

"More often than not, job descriptions list a preference for a candidate with an M.S. degree, especially when it is related to the job function," Yotty said. "Pursuing the Master of Science in Food Safety online gave me an edge as compared to those who pursued an M.S. directly following their undergraduate career."

By studying while working, she gained experience that went hand-in-hand with the degree, she said.

"This allowed me to use my knowledge gained from this program in a more direct, impactful and immediate manner," she said.

While studying online, she built connections with faculty and peers through emails and online discussion boards, she said. She also visited the Fayetteville campus once to speak with her professors, but that visit was not a program requirement.

"I did feel connected to the faculty, and they were always easy to reach if I had a question," she said. "Those professors that I connected with also helped me to connect with other industry opportunities.

As a result of her positive experience, Yotty has recommended the programs to others in her field.

"I am a cheerleader for the M.S. in Food Safety program and have encouraged coworkers to join the program," Yotty said. "Some of them did just that, and are in the middle of the program now.  Arkansas is a great school and also economical, which made it an easy decision to pursue the degree.

"This program has opened up a lot of doors for me," she said.