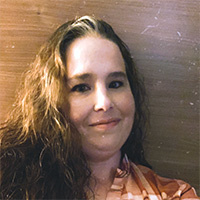 "A lot of LPNs really want to go back to school. When they find out that I’m in a bachelor’s program, it’s like, ‘hey, if I can get into that program, I can get a better degree in about the same amount of time as I could just an associate’s degree.’”

When Ashley Henson decided to pursue a bachelor’s degree in nursing, she faced a major roadblock. No local colleges or universities within driving distance of her rural Virginia home offered that degree. Her only option was to study online. After extensive research into distance education programs, she enrolled in the LPN to BSN online degree program at the U of A.

“The in-person degrees in my area were only LPN to RN,” she said. “All the RN programs that I attempted may only have 10 seats each year for an LPN to transition to an RN. Getting in was nearly impossible.”

For Henson, 36, earning a BS in nursing will open unimagined doors for herself, her career, and her family. While a student at the U of A, she vows to use the opportunities she has been given and her drive to make real changes in her life, thus: "... calling it 'a once in a lifetime' opportunity.” After earning her BSN in nursing in December of 2022, Henson plans to pursue a graduate degree.

Henson has been a licensed practical nurse for 13 years. In all that time, she never stopped working to improve her skills in long-term, acute patient care. A mother of five children ages 7 to 16, Henson lives in Bracey, Virginia, near the North Carolina border. She works in an acute care hospital on a medical surgical floor and in the intensive care unit.

She has twice attempted to go back to college in Virginia to obtain her RN degree but found that they did not meet her needs in time management, degree of advancement, convenience or flexibility, she said. Determined to further her education and expand her skill sets, Henson turned to the internet for a possible answer. Her online searches found only two universities with an online LPN to BSN degree program. One of those institutions was the University of Arkansas.

Studying online offered Henson a way to both continue working in a field she loves yet leave her enough time to spend with her family, all on her own schedule, she said.

“Learning online allows me to still work and be able to pay bills,” she said. “I can work on my assignments when everybody is asleep, though I do sometimes have to say no to going out or spending time with my family to make sure that assignments are done in a timely matter.”

The use of advanced technology to expand student experience and exposure to new techniques also attracted Henson to the U of A’s LPN to BSN program.

“We have a lot of hands-on,” Henson said. “There are module simulations that help prepare us for going to clinical. You go into the simulation just like you would into a room with the patient. It shows you a video of you walking in. You can hear breath sounds, and it’ll ask you to point to where you want to put the stethoscope. It’s pretty neat.”

Hilary Bowling, online BSN coordinator for the Eleanor Mann School of Nursing, described the virtual simulation as an “online version of our simulation lab here on campus.  The platform that we utilize immerses the students in a virtual world, allowing them to learn from mistakes in a safe environment before they enter the clinical setting with human patients.”

The U of A’s online degree program gives Henson and others in similar situations an option to move beyond their current skill levels and reach greater heights. As an avid supporter of the program, she takes every opportunity to spread the word to her fellow nurses, she said.

“A lot of LPNs really want to go back to school,” she said. “When they find out that I’m in a bachelor’s program, it’s like, ‘hey, if I can get into that program, I can get a better degree in about the same amount of time as I could just an associate’s degree.’”

Henson was one of 29 online students to receive the W.E. Manning Memorial Scholarship for online U of A students for the 2022-2023 academic year. The financial support she received from the scholarship in her final semester of the LPN to BSN online program allowed Henson to pay out-of-pocket expenses yet avoid the burden of additional student loans.

“The $1,000 scholarship means there’s one less thing for me to worry about paying back,” she said. “Getting that funding helps take a huge burden from me.”

“We are incredibly proud of Ashley and her accomplishments while in our program,” she said. “I know the Manning Scholarship is a blessing to her. Our online students often have competing financial obligations. Scholarships like this can help them breathe a bit easier while reaching for those professional goals.”

Henson is the first in her family to pursue a college degree. At the time she enrolled in the U of A online degree program, she was taking care of her father who had been diagnosed with squamous cell carcinoma.

“I was caring for him for the last years of his life,” Henson said. “He's a big part of why I became a nurse and me going back to school to get my degree. The one thing that I know, he was proud for me when I began with the University of Arkansas and will be cheering me on my journey.”