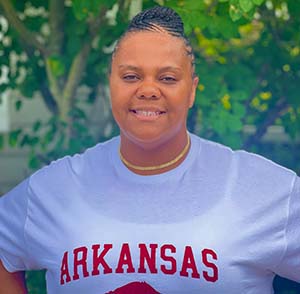 "The U of A was able to take almost all of my classes, whereas another school only wanted to take a very few credits. I just had to do a couple prerequisites before I could start my nursing classes at the U of A."

Life, by its very nature, is unpredictable. Whether a person succeeds or struggles depends on two factors: how much they want to rise up again and the support they receive while doing so. Crystal Brown faced unexpected tragedy yet, with support from faculty and staff at the University of Arkansas Eleanor Mann School of Nursing, she powers forward toward her goal.

Within weeks of Brown starting her first semester as a student in the LPN to BSN program, her husband — her childhood sweetheart of 27 years — passed away without warning, leaving her the sole breadwinner and parent to two children.

“I’m newly widowed with a 20-year-old daughter and a 14-year-old son,” Brown, 41, said. “When I first came into this college, I wasn't a single parent. I was a married woman with a husband. As soon as school started, my husband died unexpectedly, and it created chaos in my world. I was ready to drop both of my classes. I had taken some time off, but my advisor explained to me that I could write up a hardship letter. They helped me get back the money I paid for one of my classes, even though it was after the deadline. With help from the professors and the university, I was able to keep going and stay focused in school.”

In addition to redirecting every priority in Brown’s personal life, losing her husband Paul to hydrocephalus —an abnormal buildup of fluid in the brain — also changed her scholastic focus.

“I believe, both spiritually and religiously, there's a purpose in everything,” Brown said. “Nothing happens by accident. Even though I grieve, I know there's a higher purpose. I'm a nursing student, and I’ve been sharing through my nursing process and learning experiences and just trying to get more information out on the cause of hydrocephalus. Paul lived for 41 years without knowing he had hydrocephalus. He lived a normal life, thinking that some of the symptoms he experienced were related to anxiety but, unbeknownst to us, it was hydrocephalus. "

After everything that happened with her husband, Brown’s professional interest has turned away from pediatrics and more toward the neurological side of nursing.

“I'm talking to the doctors and I'm saying, ‘Have we checked them for other things?’” she said. “I'm putting other possibilities into their minds, possibilities that they might not have thought of. I'm suggesting more information on the neurology aspect, because sometimes, when you're dealing with geriatrics, you tend to focus just on geriatric diseases, and not on the other side of things.”

Brown earned her LPN degree at Salem Community College, located in Carneys Point Township, New Jersey, where she graduated with honors in 2012. That same year, she came to work at the New Jersey Veterans Memorial Home in Vineland, where she works to this day. Her duties prior to the appearance of COVID-19 involved direct patient care. With the start of the pandemic, her work focus shifted to management and prevention of the disease in the home’s staff and residents. Brown works as part of the COVID testing team that ensures that all staff and residents remain free of the virus. She educates staff on the safety protocols so that everyone — residents, staff and associated families — remain as protected as possible, whether they be inside the facility, out in public, or within their own homes.

As the only certified instructor of cardiopulmonary resuscitation in the facility, Brown also teaches life-saving CPR to other staff, she said.

Brown learned of the LPN to BSN program at the U of A from a co-worker who was already in the program. Though initially reluctant, as she was not certain she would enjoy learning in an online environment, Brown investigated several online degree programs, but found that, true to her co-worker’s recommendation, the U of A was the best fit for her, especially in terms of transferring higher education credits.

“The U of A was able to take almost all of my classes, whereas another school only wanted to take a very few credits,” Brown recalled. “I just had to do a couple prerequisites before I could start my nursing classes at the U of A.”

Brown, who plans to graduate in May of 2025, was one of 29 online students to receive the W.E. Manning Memorial Scholarship for online U of A students for the 2022-2023 academic year.

Brown’s advice to anyone who may be considering studying online is simple and straightforward: if you want it, go for it.

“Anybody who wants to pursue their education has to work for it,” she said. “It doesn't matter what degree it is, you have to want it. Nobody is going to force anything upon you. If you want it, it will come easy, because you'll be willing to give of yourself for it. That's what it all comes down to. Online learning is about giving of yourself, giving up your time to get to where you want because everything else is temporary. You have to be willing to make sacrifices so that you can get through the program."

“It's been proven time and time again. The most important thing is, if you want it, you can achieve it.”