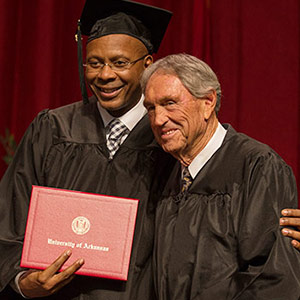 "It was great to graduate from the University of Arkansas, where I played and had so many memories."

Darrell Walker routinely brought basketball fans to their feet inside Barnhill Arena in the 1980s, but Walker was wearing dress shoes – not sneakers – the last time he heard cheers there. He was also holding a diploma from the University of Arkansas.

More than 30 years after leaving the Fayetteville campus to pursue a career in the NBA, Walker earned a bachelor’s degree in human resource and workforce development by studying online. In fall 2012, Walker stepped across the commencement stage inside Barnhill Arena, walking beside his former U of A coach, Eddie Sutton, to accept his diploma.

“I could not have accomplished this if the program were not online,” Walker said. “I was traveling all around the country, but I got it done. By no means was it a cakewalk, but it helps to have the flexibility. It fit my life perfectly.”

Walker was an assistant coach for the New York Knicks while taking online courses from the College of Education and Health Professions at the U of A. He traveled to about 30 cities across the United States and Canada each basketball season, and he studied on a desktop computer at home and an iPad on the road.

Walker is now the head basketball coach at the University of Arkansas in Little Rock. In 1982, he was a second-team All-American guard at the U of A, and he helped the Razorbacks win two Southwest Conference titles and reach the NCAA “Sweet Sixteen” twice. He went on to become a first-round NBA draft pick of the Knicks in 1983 and still ranks 18th on Arkansas’ all-time scoring list and is 10th in assists.

During his 10-year career as an NBA player, he was with New York, Denver, Washington and Detroit, ending his playing days with the 1992-93 Chicago Bulls, the team that won the NBA championship that year. He formerly coached with the Detroit Pistons, Washington Wizards, New Orleans/Oklahoma City Hornets and Toronto Raptors.

Walker was taking classes from another online institution when he discovered that the U of A offered degree programs online.

“I said, ‘let’s do this at the U of A,’” Walker said. “It was great to graduate from the University of Arkansas, where I played and had so many memories.”

Walker met his wife, Lisa, on the Fayetteville campus. They have five children, and Walker hopes his perseverance to graduate will motivate them to earn their degrees.

“I am just very proud of him,” Sutton said in a videotaped interview just before commencement in 2012. “And I’m happy to be here today and have the opportunity to give him his diploma.”

Walker found support on the U of A campus, too.

Phil Gerke, an academic advisor in the undergraduate HRWD program, helped Walker stay on track as he collected credits toward graduation.

“He kept me focused on what I needed to do,” Walker said.

Walker’s advice to other online students is “to stay with it,” he said.

“If you have a lot of hours left, you can get frustrated,” Walker said. “You feel like you can’t see the light at the end of the tunnel, but it can be done.”