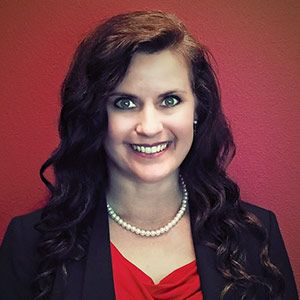 "No matter what stage you are, I think that the online platform gives you the flexibility to be able to achieve those goals."

Dawn Childress enrolled in graduate courses in the Educational Leadership program in the College of Education and Health professions in 2015, and her career and ambitions have grown ever since.

Today she is an assistant principal at Fort Smith Public Schools, a job she recently landed while earning her educational specialist degree, a degree between a master’s and a doctorate. She said it helped her stand out from candidates with only master’s degrees. She is also two years away from a doctorate at the University of Arkansas.

"I think that I’d like to be a superintendent,” Childress said. “At least, eventually, I would like to be an associate superintendent of curriculum instruction or somewhere on that level of school administration. That was always on my radar screen, I guess. What wasn’t on my radar screen is the difference I can make as an educational advocate in different areas, like for instance, on a state or national scale.”

Childress began taking classes in 2015 while working in small school district in rural Oklahoma. She said those classes helped her gain the confidence, knowledge, skills and networking contacts she needed to advance her career. She learned from professors with decades of experience as school administrators and interacted with classmates who had educational experience in other states.

“[The professors] have been really great to work with me, helping me tailor my degree plan to what I needed it to be,” Childress said. “They allowed me some flexibility so that I could achieve my goals.

“The one thing I like most about the format of the online program at the University of Arkansas is that I can still see my professor. I can interact, I can raise my hand, I can be involved in discussions, [and] I can see and learn from the other people who are in my class.”

Her professors’ investment in her success, the engagement she experienced at professional conferences, and the ability to shadow mentors gave her more confidence, she said.

Childress said she applied to the Educational Leadership program because it provided both a quality education and career networking opportunities. She has studied with other students from New York, South Carolina, California, Missouri, Minnesota, Kansas and other states, giving her a more national perspective of education and policies that shape it.

Her education also empowered her to use her voice to affect education policy.

"That was another thing that I did in my Ed.S. program that I probably wouldn’t have done before, when I was still in Oklahoma as an educator,” she recalled. “Oklahoma has a major budget crisis, and one major area that is causing a lot of teacher shortages is that teacher pay in Oklahoma is so much lower than it is in surrounding states. I did a policy action brief and sent that out to every legislator in Oklahoma. I wouldn’t have had the confidence or even thought that my voice mattered enough to do that had I not been in this program.”

“When you’re in the depth of your professional career, and it is as taxing and as involved as being a school administrator, four years seems like a really long time,” Childress said. “Even though I planned on going all the way through to earn my doctorate, having that moment of attainment in earning an Educational Specialist degree after only two years, to feel like you’ve actually accomplished something after two years, I felt was a good motivator for me.”

She chose the online program because it allowed her to remain highly effective in her job, as well as care for her family, she said.

“The thing about being an online student is that it gives you a lot of flexibility.  If I am able to get home before my class starts, I can throw a casserole in the oven and not miss a second of class, yet still have dinner,” she said. “I can sit on my couch or sit at my table, and I have the comforts of home at the end of a long day.”

The mother of three began her career as a teacher in 2007, the same year she earned her bachelor’s degree from Northeastern State University in Oklahoma.  She advanced to the post of assistant principal at a small public school in Oklahoma in 2013, after earning a master’s degree in school administration in 2010 and gaining National Board Certification in 2012. When her youngest son graduated from high school in 2015, she was ready to pursue her doctorate, she said.

“I’ve had people in my classes that are in all sorts of different phases of life, some have small children, or they are like me and their children are grown,” Childress said. “No matter what stage you are, I think that the online platform gives you the flexibility to be able to achieve those goals."

“Some that have little-bitty kids might not take two classes at a time, they might go a little slower, but that’s okay. What matters is to continually push forward and to learn and grow. Different people have different paces for that, but the most important thing is that first step. … If you’re considering it then you should just take that step and go for it.”