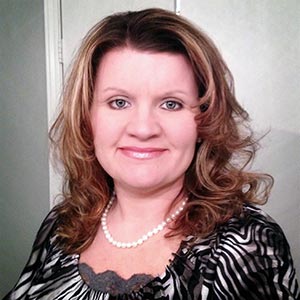 "The instructors are fabulous; they understand that we have lives, we have jobs, we have kids, and they’ve always been wonderful about helping"

Jamie Dimick, a single mom from Oklahoma, built a better life for her and her two daughters by studying online.

Dimick recognized the salary of a registered nurse alone would not pay for the lifestyle she wanted for her two daughters, now ages 13 and 15 years. That is why she went back to school, a couple of times. In December 2018, Dimick will earn a Master of Science in Nursing.

“I didn’t want to be a single mom working three convenience store jobs,” she said. “(Becoming a nurse) gave me a way to take care of my kids, but I didn’t want to stop there. By taking that next step, I was going to be able to provide more for them.”

Dimick, who now works full-time as an instructor at a technical school and as-needed at a local hospital, remembers the struggle she endured when she left Alaska in 2007, returning with her two daughters, 2 and 5 at the time, to her native state of Oklahoma.

“I had my two daughters, no car, no clothes, everything we had was left in Alaska,” Dimick said. “I had $20 to my name. I decided I was going to go into nursing. Now, eleven years later, I don’t have to work that extra job if I don’t want to. It’s not about the money now, it’s about doing what I love.”

Dimick became a Licensed Practical Nurse in 2009, then progressed through RN and Bachelor of Science in Nursing. She started the U of A’s online Doctor of Nursing Practice program in 2014, but life’s pressures forced Dimick to re-think her options.

“I’m down to my clinicals, but my kids need me, so I switched over to the master’s program,” she said.

The flexibility of online classes attracted Dimick to the U of A online program, she said.

“I’ve had to work full time the entire time I’ve been in nursing school,” Dimick said. “There have been times that I’ve worked two and three jobs. At one point, I was so exhausted—mentally and physically—I was coming home in tears at the end of the night. Taking online courses let me pursue the degree and the education that I wanted, but I could still be out in the workforce, earning a living and being there for my kids.”

U of A faculty and student peers supported Dimick throughout her studies.

“The instructors are fabulous; they understand that we have lives, we have jobs, we have kids, and they’ve always been wonderful about helping,” she said. “They’re there to see their students succeed. Everybody seemed to reply promptly if you emailed or called. As far as the students, there’s quite a bit of group work, but we used the collaborate sessions or set up phone calls. Even though we’re all in different areas, we got the projects done via email or however we chose to do so. I don’t think there was any difficulty communicating with others in the class.”

Dimick plans to use her master’s degree to raise the quality of patient care and advance the careers of future nurses.

“After some bad experiences at some major medical facilities, I decided that I wanted to make a difference with nurses,” Dimick said. “I wanted to be a positive influence in their life, and I wanted to be able to change patient care through the attitude and work ethic of the students that I could encourage, mentor and support.”

Dimick aspires to help nursing students to improve their lives through education and to lend a hand to those who face personal obstacles, such as other single mothers who come from divorce and abusive relationships.

“I am now in a position to help those less fortunate than myself, showing others that the impossible really isn’t so impossible after all, and most important my children have grown up watching me succeed, and they know they can overcome all challenges they might face in life” she said.

“It opens up opportunities beyond the imagination,” she said.