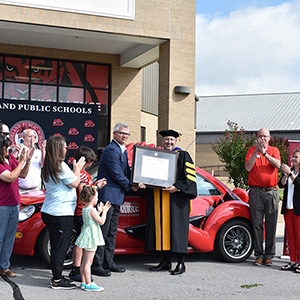 "The faculty of adult and lifelong learning have a balance between Doctors of Philosophy and Doctors of Education and the way they interacted with each of us as students, my experience was that they were able to meet me where I was based on my previous degrees."

John Kelly of Brookland devoted the last 16 years to educating children and adults in the Delta of eastern Arkansas. Simultaneously, he advanced his own education, reaching a pinnacle in May by earning his doctorate in adult and lifelong learning online from the U of A.

The Razorbug Diploma Tour stopped in Brookland in August to celebrate Kelly's achievement.

"It's all about managing your time and knowing, in some areas, how to say no," Kelly said. "If it's valuable toward achieving your goals, then you stay focused on it. I have a plaque in my office that says obstacles are when you take your eyes off your goal, and so completing an online program takes that ability to balance work life and family. It's the key factor of success."

Kelly's wife, Rochelle, and his children, Trey, 13, and Charlotte, 4, joined him along with friends and employees of Brookland School District for the Aug. 2 presentation. The U of A faculty and staff toured eastern Arkansas for a week to present framed diplomas to graduates of online degree programs. In June, the Razorbug tour traveled through western and south Arkansas, celebrating graduates of online programs. More than 440 U of A students graduated from online degree programs in May.

Michael Hevel, head of the Department of Rehabilitation, Human Resources and Communication Disorders at the U of A, presented Kelly's framed diploma in front of Brookland High School. The district is an important educational centerpiece for the family because the next generation of the Kelly family attend school there.

The Razorbug is a converted red Volkswagen Beetle that sports a Razorback snout, tail and razor-edged spine. It has been used for recruitment and special events since 2005.

Earlier in his career, Kelly taught high school social studies and coordinated gifted and talented education and special projects in the Marked Tree School District, served as principal of East Poinsett County Junior and Senior High School in Lepanto and worked as instructor and coordinator of adult education at Arkansas Northeastern College at Blytheville.

As director of adult education for the past three years at ASU-Newport, Kelly coordinates grants, curriculum and staff for four locations in three counties - Craighead, Jackson and Poinsett - a region in the Arkansas Delta with roughly 145,000 people. The program is part of statewide adult education efforts by the Arkansas Department of Workforce Services to help Arkansans earn their high school diploma equivalency. Kelly has managed $1 million in state and federal grants since beginning the position in 2019.

His doctoral research analyzed variables that affect reading test scores of students enrolled in Arkansas adult education programs, and he has presented on adult education at national conferences.

Kelly said he did the majority of his studying between 1 and 3 a.m. six days a week for three years. It wasn't until he got deep into his dissertation that he worked on it some during the day.

"I wanted my children to be able to see me with a book in my hand, but not necessarily a laptop so I made sure I did most of my coursework in the evenings when they were asleep and balanced the sleep schedule in accordance to the workload that goes on," he said. "The professors worked with one another to make sure that we had, as a cohort, a minimum amount of overlap of due dates. We were able to, as a collective, know that we have assignments due, but it's not an excessive amount of work due on the same day."

Kelly described both the faculty and the cohort model of the program, which requires three on-campus visits per semester, as exceptional. Working as part of a cohort of students allowed him to establish a lifelong bond with people with diverse backgrounds and perspectives, he said, with the group including K-12 administrators, business trainers, published authors, technology field trainers, university staff and people like him working in adult basic education. His classmates lived in other states including Illinois, Washington, Louisiana and Oklahoma.

He also thanked the Arkansas Adult Learning Resource Center for a scholarship that proved the catalyst to him pursuing his terminal degree with the U of A. He received customized, individualized feedback from the faculty in the online program, Kelly said, and feedback from peers on dissertation chapters was also valuable.

"The faculty of adult and lifelong learning have a balance between Doctors of Philosophy and Doctors of Education and the way they interacted with each of us as students, my experience was that they were able to meet me where I was based on my previous degrees," he said. "Feedback … is a valuable experience, albeit humbling, and you really realize when it's all said and done thanks to the faculty and relationships we have with each other as a collective that we are advancing the field. We have a perspective of where we are, and we know where our studies are in relationship to the work that was done by all the researchers before us."