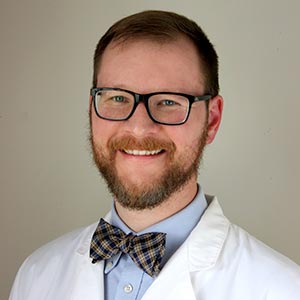 "The staff and faculty really were focused and geared toward success for the students. They really wanted to educate people and prepare them for future careers."

Jonathan Miller is among the elite. He is one of the few nurses in his hometown of Texarkana, Texas, with a Doctorate of Nursing Practice degree.

“I’m kind of a front-runner in this area [of Texas],” Miller said. “One, because not many nurse practitioners are in a hospital setting like I’m doing, and two, me having a doctorate degree, I feel, offers me better respect both at the bedside and at a professional level.”

Miller’s long-term career goal has always been to be a nurse practitioner. As far back as high school, he saw the advantages available to someone with an advanced degree. With his doctorate, Miller intends to advance his career and perhaps someday teach others to be successful nurses.

Miller began the doctoral program in 2015 as a registered nurse with a bachelor’s degree. The RN to DNP program allows students to bypass a master’s degree and move directly to a doctorate.

“I started with a bachelor’s and finished with a doctorate, and never got a master’s in-between,” Miller said. “It was about the same time frame as a regular master’s program would be. I thought that if I could get it all done in one fell swoop, it would be nice to be done with everything.”

He graduated in May of 2018 and accepted a new position with an intensive care physicians’ group. The potential of Miller’s advanced degree stretches beyond his current job, he said. He sees multiple future career opportunities in both clinical and academic settings.

“There are  several nursing schools here in Texarkana and in the surrounding areas,” Miller said. “Several of them have started working on giving bachelor’s programs and even master’s programs. If I had a doctorate and experience working in a hospital setting, I could also maybe teach, so that was a big draw to me.”

The flexible online format was important to Miller, he said. As a married father of three, he could not stop working and commit full-time to the classroom. The daily course workload did not take away from his professional or family time, as long as he studied every night after his children fell asleep.

Miller said he received solid support from his program in the Eleanor Mann School of Nursing.

“The staff and faculty really were focused and geared toward success for the students,” Miller said. “They really wanted to educate people and prepare them for future careers.”

Miller built a strong relationship with two academic advisors in particular—Thomas Kippenbrock, who chaired Miller’s capstone project, and Angela Stewart. He worked closely with them throughout his three-and-a-half years at the U of A.

“I really feel like they helped to guide me and shape my capstone project into what it eventually became and offered me advice on how to move from my graduate studies and into the real world,” Miller said.

Since graduation, Miller enjoys time with his family and looks forward to what his future will bring.

“I was, overall, very satisfied with my studies at the U of A,” Miller said. “I would highly recommend both the nursing program and the degree plan that I did to anyone.”