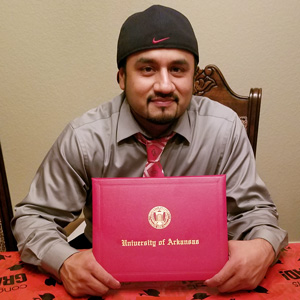 "Having an online program is very helpful for people who have families and full-time jobs."

There can be many hurdles to earning a bachelor's degree, including competing family responsibilities, work obligations and cost. Jorge Camero, 39, of Farmington surmounted them all and is about to cross the finish line.

Jorge, a warehouse supervisor in Fayetteville for Tyson Foods Inc., is six credit hours away from earning a bachelor's degree in Human Resource and Workforce Development, an online program at the University of Arkansas. He's reached this goal while balancing a full-time career, caring for his cancer-fighting mother, and spending time with his wife and three children.

"Having an online program is very helpful for people who have families and full-time jobs," Jorge said. "You can work at your own schedule. Having online resources, it helps you to be able to do all of those activities."

Jorge, for whom English is a second language, studied and completed assignments while working different shifts, taking his turns to bring his mother to the doctor, and spending time with his son and daughters, ages 11 to 15.

"I like to think that hard work and sacrifice does not go unnoticed, by my kids especially," he said. "I think that it motivates them to do well in school and pursue a degree as soon as they're done with high school."

Jorge, who participated in U of A commencement May 13, 2017, reflected on his life.

"Growing up in Mexico, I never thought I would be at this point," Jorge said, who moved to Brownsville, Texas, in 1989 and Arkansas in 1995. "I have a nice home, I am a work supervisor, and I walked at graduation. I was just astonished that I've achieved this milestone."

In 2011, when his family lived in Green Forest, Arkansas, he and his wife, Amy, enrolled in face-to-face and online classes at a community college in nearby Harrison. Both qualified for needs-based assistance from Arkansas Career Pathways, a state, grant-funded program that assists with tuition, advising and other support. They both succeeded.

Amy earned her associate's degree in medical laboratory technology, and Jorge earned associate's degree in business administration and general studies, in 2014 and 2015 respectively. The same year, Jorge was accepted into the online bachelor's degree program from the College of Education and Health Professions at the U of A. Amy enrolled in a bachelor's degree program from the University of Arkansas for Medical Sciences at Little Rock.

Scholarships from Phi Theta Kappa and Arkansas Challenge made it possible for Jorge to maintain a faster pace while completing his bachelor's degree, he said.

"I didn't have the burden of worrying about taking out loans or future debt," he said. Without those scholarships, he said, "I would probably be taking money away from my family, or I might not be able to take four classes [a term], maybe just two or three."

Earning his diploma will mean more career opportunities, Jorge said. At some point, he plans to seek a position in the human resources field, where he could use his education and skills to help others succeed and grow. "It would give me the opportunity to work with people to find solutions to problems in their lines of work, and then they may turn around and apply what they truly learn," Jorge said. "This also helps the person achieve success in moving into a higher position with the company."

Providing opportunities for employees to thrive creates a positive work environment, Jorge said. And that is good for everyone, including the company.