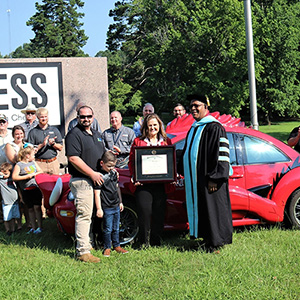 "There's an ungodly amount of tools available. I used the UA Libraries every single day online. It opened all sorts of resources I could pull from and interesting topics I'd never had experience with. I could really dive into what was there."

Lori Ragan's former supervisor told her, "You have an HR brain; you just don't know it. Go for it." Ragan knows it now. And, she went for it - a college degree in the field she loves.

The training and development specialist at Lanxess, an international chemical company with a facility in El Dorado, received a framed diploma for her bachelor's degree in human resource and workforce development education from the U of A as part of the Razorbug Diploma Tour in June. Mandel Samuels, teaching assistant professor in the program, traveled almost five hours from Fayetteville to present the diploma on the company's front lawn on June 24.

Samuels wore full commencement regalia on the hot summer morning as Ragan's family, friends and several co-workers gathered to watch and show their support during the videotaped event. Samuels and Ragan met in person for the first time at commencement in May. The tour is celebrating the success of students in online degree programs. More than 440 of them applied for graduation in May

Kevin Hazen, the site manager, told Ragan later in a cool break room with a Razorback-decorated cake, "We're extremely proud of you. Getting a degree is one thing; getting a degree while holding a job and taking care of your family is off the charts."

Ragan, who has a 6-year-old son, Gannon, with her husband, Whit, said she felt "over the moon" to be able to both walk at the graduation ceremony in May and to have the Razorbug with U of A faculty and staff visit her workplace. Lanxess officials believe so strongly in education that the company offers a tuition reimbursement program.

"These are the people I work with and spend most of my days with," she said. "I enjoy working with people, talking to people, helping people, trouble-shooting."

Ragan said she feels fortunate to be sandwiched between baby boomers with many years of experience at the company and new hires she trains.

Ragan earned an associate's degree from South Arkansas Community College in El Dorado. Her previous training and work experiences led her to the position of training coordinator with Lanxess in 2014. During that time, the training coordinator reported to the human resources manager.

"My career was transformed by this HR manager, who soon became one of my most influential mentors," Ragan said. "She invested time in me and challenged me. She did not allow me to settle and kept me on my toes at all times.

"In order to work through HR scenarios, she allowed me to brainstorm and utilize my problem-solving skills," Ragan continued. "As a result, she saw something in me that I had never imagined as a potential future for myself. It was through her that I was connected with a mentor with over 35 years of human resources experience. That spoke volumes to me, to serve in a field for that long. I really started to pick her brain. I attached myself to those I thought could sow a seed in me and what I was wanting to become. I wanted to grow."

That mentor worked with Ragan every day to develop her skills. Ragan was promoted to the position of human resources assistant after working side by side with her for 18 months.

"I was encouraged by my current manager to return to school and complete my bachelor's degree so that I may have many more opportunities in the future," Ragan said. "In the course of this journey, I am so grateful to each and every mentor and manager who has invested in my future. They have been willing to share their knowledge and have been supportive of my goals. Throughout my career, I intend to expand both my knowledge and skill set so that I can grow right along with my industry. One day, I hope to be an influential mentor to others, just as many have done for me."

Ragan said she is not looking to leave the company. She feels deeply invested in it, and her family is El Dorado.

"We have employees who have been here from one week to 51 years," she continued. "I was building relationships and finding out how did people get where they were. Each one spoke highly of returning to school; either they wish they did, or they were glad they did. That got my wheels turning. I thought this is the time; take hold of this opportunity."

The human resource and workforce development education program gave Ragan a fresh perspective, she said, not only from the information she learned in her coursework but by interacting with other students who work in other industries and businesses. Through group projects, she learned a vastness of approaches in HR, she said.

She offered advice to anyone considering studying in an online degree program.

"Don't second-guess yourself," Ragan said. "Keep pushing for it. Don't put opportunities available to you off any longer. If you are second-guessing yourself, talk to someone."

She went into the program thinking it was going to be a bit easier than she eventually found it to be, although she expected it to be a bit of a culture shock because she had never taken a full load of classes before. She credited her academic adviser, Denise Bignar, with providing valuable assistance and advice as she got deeper into the program. Bignar advised her to reach out to online resources available through the U of A.

"There's an ungodly amount of tools available," Ragan said. "I used the UA Libraries every single day online. It opened all sorts of resources I could pull from and interesting topics I'd never had experience with. I could really dive into what was there."

Ragan said she was impressed with every faculty member she worked with in the program.

"Dr. Samuels pushed me further than I thought I could go," she said. "Even when my answer to something wasn't incorrect, he encouraged me to look a bit deeper."

The Razorbug is a converted red Volkswagen Beetle that sports a Razorback snout, tail and razor-edged spine. It has been used for recruitment and special events since 2005. The tour took place over two weeks in southern Arkansas and the River Valley in June.