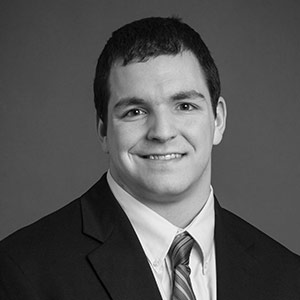 "The personal attention of the professors helped me fully grasp the advanced concepts covered."

Engineer Mike Rademacher of St. Louis, Missouri wanted to further his career without sacrificing time at his position with Burns & McDonnell to do so. He decided to enroll in the online Master of Science in Electrical Engineering program at the University of Arkansas.

“The online program allowed me the flexibility to continue working full-time while achieving a graduate degree,” said Rademacher. “Frequent traveling for work would not have allowed me to pursue this degree in the typical on-campus approach.”

Rademacher was impressed by his U of A professors.

“The professors administer online courses with the same rigor as the on-campus experience,” he said. “The personal attention of the professors helped me fully grasp the advanced concepts covered.”

Rademacher was also pleased by his interactions with peers throughout the program.

“The connections made within this program are invaluable,” he said.

Because of the benefits he received from earning his M.S.E.E. from the U of A, Rademacher has recommended the program to several of his coworkers and colleagues.

“The M.S.E.E. provided me with the necessary technical expertise and credential to excel in my chosen career,” said Rademacher. “This degree has increased my technical skills, improving job performance.”