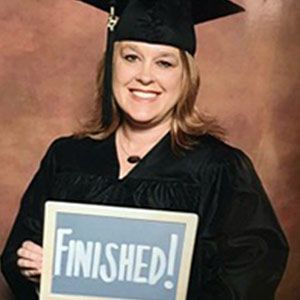 "I was able to apply my knowledge immediately in my workplace."

For many years, attending Razorback football games in Fayetteville filled Sharon Williamson, a former University of Arkansas track star, with sadness and regret.

Williamson left the University of Arkansas in 1992 without her degree, and that regret haunted her whenever she visited Fayetteville to watch Razorback football games or talked with people who assumed she graduated. 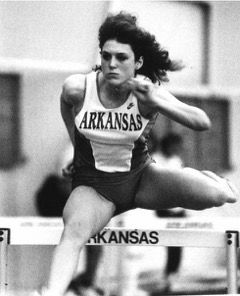 "I felt bad about it," said Williamson, a 45-year-old preschool director at a church in Corinth, Texas. "I should have tried harder. I should have studied more. I went to college to run track. I was not ready to be a student. Why wasn't I more mature?"

Now, 24 years later, Sharon has re-written that ending. She became a U of A graduate in 2017, after studying online to earn a bachelor's degree in Human Resource and Workforce Development. Her regret is over.

"It was just the best experience ever," Sharon said. "It was such a feeling of accomplishment. That piece of paper (diploma) just means so much more than if I had finished it 24 years ago."

What she learned as a human resources major has strengthened her career as a preschool director, she said.

"I was able to apply my knowledge immediately in my workplace," she said.

Although she had the option of studying closer to home, she wanted to graduate from the U of A and enjoy all of the traditions she missed earlier, she said. She wanted to have her name added to Senior Walk, where graduates' names are etched into sidewalks across the Fayetteville campus. She also attended both the class ring ceremony and commencement in May 2017.

"It means the world to me to be part of that tradition," Sharon said. "I'm so thankful the U of A had that (online) program. I started there, and I really wanted to finish there. "

"I wanted a degree from the University of Arkansas," she said. "I wanted my degree to look like anyone else's (who studied there). I wanted a student ID, and I got to go to the movies with a student discount. I needed that full, but online, student experience."

And she got it, she said.

"You're an equal and valuable student and a part of the U of A," she said. "That's what makes the experience. You were just part of everything that was going on. I loved that."

She studied while her two sons went to college, her daughter became a high school senior, and her oldest son became engaged. The flexibility of the online classes allowed her to balance her studies, work and family activities.

That doesn't mean it was easy, especially the first semester back, she said.

"When I applied myself, I was a good student," she said. "Not that I think I got smarter, I think I got wiser. I just want other people to know they can do this."

"That would be a huge blessing to folks," she said. "I think even more people would be drawn to the U of A."

On a family note, Sharon is thankful for the sacrifices her husband, John, and their three children made for the last three years. John – who played football for the Razorbacks in the 1990s and graduated with a bachelor's degree in speech pathology in 1994 – cooked dinner most nights so that she could study.

"Without the support of my family, I could not have taken 12 to 13 credit hours a semester," Sharon said. "He (John) wanted me to write a better ending to that story."

Both she and her husband are planning to apply for master's degree programs, she said.

With her bachelor's degree in hand, she is determined to stop criticizing herself for her academic past.

"Now I'm giving that part of me a break," Williamson said. "I've let myself off the hook. It didn't happen the way we planned it, but it happened the way it was supposed to happen. I just feel like I was able to close that chapter in a very positive way."