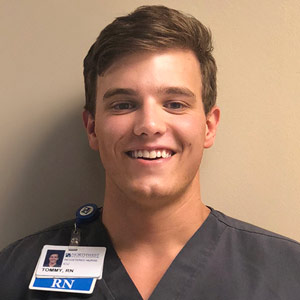 "I chose to (study) online because of the flexibility. I can work while studying, and it’s nice not being tied to one area."

Earning a bachelor’s degree in nursing is one of Thomas Nance’s life goals. In December 2018, he plans to check it off the list.

Nance, who works three 12-hour shifts in an intensive care unit each week, needed a degree program that he could complete while working full-time and handling family responsibilities. He chose the R.N. to Bachelor of Science in Nursing program from the College of Education and Health Professions.

“Getting a bachelor’s degree is one of the stepping stones,” Nance said. “I chose to do it online because of the flexibility. I can work while studying, and it’s nice not being tied to one area. I went to the U of A because we’re the Razorbacks.”

Nance, a straight-A student, was one of four people to receive the W.E. Manning Memorial Scholarship for online U of A students in fall 2018, the first time the scholarship was awarded. He has plans to get married in 2019 and later continue his education.

“I’ve always been motivated to do the very best I can,” Nance said. “I plan to pursue a doctorate in nurse anesthesia.”

At one point, Nance had planned to follow in his father’s professional path of law enforcement, but that changed after his father was stricken with a life-threatening diabetic condition. After Nance spent 10 days in the hospital with his father, watching the medical teams work, he switched his academic course in 2015 to become a registered nurse.

Working long hours in the intensive care unit at Northwest Medical Center did not stop him from taking his education to the bachelor’s level.