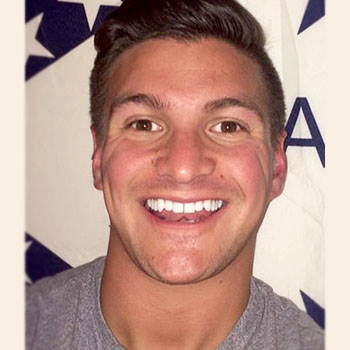 "The skills I’ve learned while attending the University of Arkansas are on display daily. I know I’ve become a more effective communicator, leader and analyst."

Caleb J. Findley has served his country, including a deployment in Afghanistan. He now is using the focus and discipline he learned in the U.S. Air Force to earn a Bachelor of Arts in Communication degree from the Fulbright College of Arts and Sciences at the University of Arkansas.

Findley, a member of the Arkansas Air National Guard since 2008, said he did not know how to study or manage his time in 2006, when he started college with a scholarship. He lost his scholarship, joined the U.S. Air Force, and was deployed in Afghanistan in 2012.

“While there, I saw a lot of scary stuff and was part of some very intense situations, but I managed to make it through that deployment with my life,” Findley said. “I distinctly remember sitting in a bunker after a mortar attack, thinking, ’Where would I be if I had taken college more seriously?’ ”

When he returned to the states, he entered the Air Force geospatial intelligence analyst school and learned productive study habits. Today, Findley is enrolled at the U of A and is one of seven people to receive the W.E. Manning Memorial Scholarship for online U of A students for the 2019-2020 academic year. He plans to finish his bachelor’s degree in communication in December 2019.

“I’ve worked 40 hours a week and maintained a 3.4 grade point average,” Findley said. “It hasn’t been easy, but it’s been fulfilling. It’s been three years of giving up weekends, but I appreciate being able to do it.”

Findley said he recommends that other people earn their college degrees because his own studies have helped him in his career.

“I use my communication skills in so many facets of my career,” he said. “I’m constantly briefing commanders, writing reports, and interacting with my subordinates. The skills I’ve learned while attending the University of Arkansas are on display daily. I know I’ve become a more effective communicator, leader and analyst.”