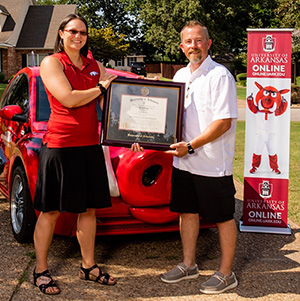 "So, I was concerned about an online program. But it was not as hard as I thought it would be not having that same kind of personal interaction. The content they provided, I could tell it was well thought-out and designed in such a way to be useful. I've been an advocate for the program ever since I started it."

When you see "Learn it Today. Use it Tomorrow" on the website for the online master's degree in engineering management, you can believe it, said a Fort Smith engineer.

"I learned something in each class that I could use the next day in my job," Jason Rose, 43, said at his home July 1 during the RazorBug Diploma Tour. "Every single class was relevant to what I was doing and what I wanted to do. Every course I took added value."

Megan Whobrey, adviser and academic services coordinator at the College of Engineering at the U of A, presented Rose's master's degree diploma on a sultry afternoon as family and friends of Rose gathered. They called the Hogs in front of the RazorBug after the formal part of the brief ceremony was over.

Starting in June, the tour spent a week in southern Arkansas and another week in the River Valley. It celebrated the success of U of A students in online degree programs. More than 440 of them applied for graduation in May. The RazorBug is a converted red Volkswagen Beetle that sports a Razorback snout, tail and razor-edged spine. It has been used for recruitment and special events since 2005.

Rose completed his undergraduate degree 22 years after he graduated from high school. Although he had many years of experience in manufacturing, sales and management, he had found himself in a job he did not like and knew he needed to create new opportunities for himself.

"I decided I wanted to do something different," he said. "I had worked around engineers for several years in the past, and engineering always intrigued me."

A few weeks after finishing his bachelor's degree in mechanical engineering from the U of A, Rose saw that the U of A offers a master's degree in engineering management that can be earned online. He enrolled in the second eight weeks of that semester.

"So, I was concerned about an online program," Rose continued. "But it was not as hard as I thought it would be not having that same kind of personal interaction. The content they provided, I could tell it was well thought-out and designed in such a way to be useful. I've been an advocate for the program ever since I started it."

Rose said he's not sure he can take credit for this, but several of his fellow employees at Rheem Manufacturing in Fort Smith are also enrolled in the engineering master's program. He was one of a few students engineering faculty invited to an online meeting to discuss the program. They asked what they could do to improve the program, and Rose said, "Get the word out."

"It adds value," he said. "I feel like it has added value for the company I work for. Every class I took added value. So many aspects in my current career touch on courses I took. I can take a piece from my degree almost every day. That in itself showed the value it added."

The RazorBug Diploma Tour was organized by the U of A's Global Campus.