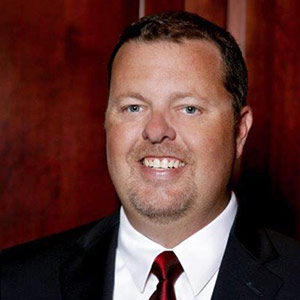 "I couldn’t have done it without the online option."

A vice president for a major food company in Arkansas did not put his career on hold to advance his education. He studied online.

Shane Calhoun, vice president of quality assurance for OK Foods Inc. in Fort Smith, graduated in December 2014 with his master’s degree in food safety from the Dale Bumpers College of Agricultural, Food and Life Sciences at the University of Arkansas.

“Obtaining my master’s degree was a goal I had set early in my career,” Calhoun said. “I couldn’t have done it without the online option.”

Calhoun’s career led him across the state of Texas and into Arkansas, moving him steadily upward in industry ranks. Originally from Mount Pleasant, Texas, he graduated with a bachelor’s degree from Baylor University in 1998. While an undergraduate student, he began working in the microbiology laboratory at Plantation Foods in Waco, Texas.

“My first job after graduation was as a lab manager for Pilgrim’s Pride Corp. in Mount Pleasant,” he said.

He then moved on to Siliker Laboratories, an international company that specializes in helping other companies find practical solutions to food safety and quality challenges throughout the food supply chain. He served as a technical service manager there for a few years before returning to Pilgrim’s Pride as the director of laboratory operations and food safety. He has worked as a vice president of OK Foods for several years.

“The program seemed to fit the career I am in, and the University of Arkansas is a great school and well-known in the poultry industry,” Calhoun said.  “Online was the only option for me due to travel and living in Texas at the time.”

He also spends much of his spare time with his 3½-year-old daughter.

Calhoun learned about the online program from John A. Marcy, a professor and poultry-processing specialist at the U of A Center of Excellence for Poultry Science. They met at a food safety meeting in Grapevine, Texas, years ago, and they’ve remained in touch.

“Dr. Marcy was key in this whole process for me,” Calhoun said. “I couldn’t have done it without him.”

Although he sometimes studied from hundreds of miles away, Calhoun still feels a part of the university’s learning community.

“I feel very connected to the university and plan on visiting whenever I am in the area,” he said.

Based on his experience, he would encourage others to enroll in the degree program.

“The University of Arkansas is well-known within the poultry industry, with many graduates working at high levels within many different poultry companies,” Calhoun said. “The curriculum includes basic fundamentals for food safety, while at the same time including new developments within the industry.”

The Master of Science in Food Safety online degree option is a multidisciplinary program that prepares professionals to address and solve environmental and biological issues in all agricultural industries, education and agencies.