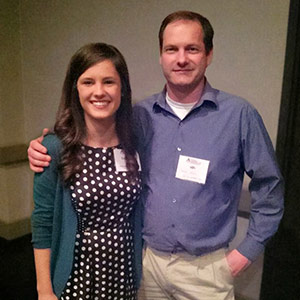 "I savored every class. I felt like I had climbed a ladder of knowledge."

Andrew Hill, an engineer from Jonesboro, wanted a deeper knowledge of engineering, especially thermodynamics and heat transfer, but he had a tough time finding the right master's degree program.

He found it while exploring the website of the college his daughter attended. His daughter's enrollment on the University of Arkansas campus in 2010 led to his online enrollment.

"When [Courtney] started college, I wanted to stay in touch with what she was doing," he said. "I was looking at the [College of Engineering] website, and I saw the online program with deeper courses in thermodynamics and heat transfer. I said this is what I've been looking for."

Hill, now a senior design engineer with Caterpillar Inc., graduated with his Master of Science in Engineering degree in May 2015, one year after his daughter, Courtney Hill, earned her bachelor's degree in civil engineering from the U of A.

"This was the first program that allowed me to continue my education in the direction I wanted to go," Hill said of the online program.

Andrew Hill's home location and work schedule barred him from coming to Fayetteville to attend classes.

And his work is not always in Jonesboro.

"I'm always on the road between home and Illinois," he said.

That is why access to an online program was so important to him, he said. It provided the flexibility he needed to work while advancing his education.

"Some things are made possible through technology," Hill said. "There's nothing that can replace the classroom, but this came about as close as you will ever get."

Hill watched recorded lectures and completed assignments online, he said. He also met weekly with faculty through Blackboard Collaborate, an online interactive tool that lets participants see and hear each other through streaming video.

"The dedication the instructors showed, I've never had anything like that," Hill said. "They made me feel right at home."

"A lot of the things I learned allowed me to be promoted," Hill said.

But that's not why he went back to college.

"What is important to me is increasing my knowledge in a way to have new ideas while I'm learning," Hill said. "I knew I wanted to go as deep as I could into thermal systems design. After a few classes, there was no way I was going to quit. I was learning too much.”

"All I had to do was work hard, and that's something I know how to do," Hill said. "It was challenging, but it was challenging in a way that I saw myself finishing what I'd started."

The cost of the program was reasonable, he said.

"You can't get a better deal for a distance class," Hill said.

A bonus to going back to school in his late 40s, Hill said, is he appreciated the knowledge he was absorbing.

"Young folks want to rush things," Hill said. "I savored every class. To me it's valuable knowledge. I felt like I had climbed a ladder of knowledge."