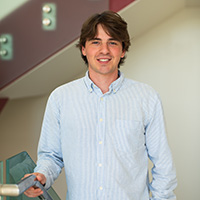 "There’s different emphases. We've got doctors and lawyers in the program, like people from all walks of life. I think no matter the field that you're in, you can apply at least something from this program. I think that you can develop your career in any field if you do this."

Will Smith has both a background in science and technical knowhow in water treatment; what he wants to set himself up for the future opportunities is a degree in business. An online degree from the University of Arkansas will help him make more of his life.

Smith grew up in Little Rock, Arkansas. He moved to Fayetteville to attend the U of A, where he earned his bachelor’s degree in biology in 2018. After graduating, he stayed in the area, applying his background in science to a variety of jobs including at a vet's office and a pond and lake management company as an aquatic biologist. For the past 2 ½ years, Smith has been working full time as a water treatment plant operator for the Benton Washington Regional Public Water Authority. His main job duties depend on the night, but he has three main job tasks, which include ensuring that the tanks do not get too full or empty, monitoring the water quality that is going out into the distribution system to make sure that all the parameters are in compliance with the government, and walking around the plant to make sure the valves and pumps are working correctly.

Although Smith recognized once he gets 10 years under his belt he could make very good money in his current job, he did not want it to be his ceiling.

“I guess I looked around me and my current job is something that a lot of people make careers out of,” he said. “But I just didn't want to, I didn't want it to be it. I wanted to keep learning, advancing my knowledge, capabilities, and resume. I don't know if this is the right word, but it kind of scared me to think that like I would be stuck at that level forever. I just wanted to make more of my life.”

Last year he returned to the U of A to get his Executive Master of Business Administration and expects to graduate in the summer of 2023. Smith chose to pursue an MBA because of advice from his boss.

“I went to my boss, and I told him I really like this industry because it's the first job where I feel like I'm not just making money for someone else,” he said. “It feels like I'm providing a very valuable service to people. I would like to advance my career in this industry.”

With Smith’s scientific background in biology and through being an operator in water treatment, his boss told him the thing that he is lacking would be the business side if he wanted to go into administration, which is what he wants to do. As soon as he heard that, Smith started looking at his options. He looked at all the local colleges, online colleges and other states. He mostly put his focus on the U of A because that is where he received his undergraduate degree, and he lives nearby.

“I just happened to stumble upon the MBA, and I was like, wait, this is too perfect for me,” he said. “I applied for it and got in. I applied like five days before the deadline.”

Smith recommends this degree program for people who are trying to go into business.

“There’s different emphases,” he said. “We've got doctors and lawyers in the program, like people from all walks of life. I think no matter the field that you're in, you can apply at least something from this program. I think that you can develop your career in any field if you do this.”

Although Smith did not have a background in business and has never enrolled in any business-related courses in the past, he decided to pursue the finance track in the EMBA program. He contemplated business analytics, but decided on finance based on the advice of his boss. Plus, that’s the one he found most interesting.

“I think I've put in more work than someone who has a business background because I'm learning all this stuff for the first time,” he said. “But the professors are really good, and they teach it in a way that someone that doesn't have a background can understand it. I've had a very pleasant experience and I've learned a lot.”

Smith’s main reason to select an online rather than in-person program was simple, time. He works the night shift, from 7 p.m. to 7 a.m. with a rotating schedule, making traditional in-person classes difficult.

“There’s just no way I could go to class,” he said. “I would be sleep-deprived within two weeks and not able to function so the online just made a lot of sense. Even showing up once a month in person on Saturday is still really tough on me physically and mentally. The way that my schedule works out, I'm either working the night before class or I'm working the night after class, but it still works better than the in-person would.”

Smith utilizes a variety of campus resources. He has met with the career advisors a few times to get their advice and talk about how to best go forward in his current situation. He also occasionally uses the library to study when he’s on campus. To stay in touch with professors and classmates, he uses e-mail, GroupMe, and Zoom, which are especially useful for group projects. The program involves a variety of projects, including a global immersion project during the last semester of the program. Students work in teams to develop a business model in a foreign country or work remotely with the company abroad.
In terms of advice Smith would give to someone who might be considering studying online, he said the first thing that pops into his head would be get your time management in order, as soon as possible.

“It's easy to get behind in these classes, especially since you get the weeks’ worth of material at the beginning of each week,” Smith said. “If you get behind a few weeks, that's going to be challenging to catch up and then stay caught up. You need to get your affairs in order before. If you already feel like you don't have enough time for things, maybe fix that before you apply.”

Smith was ecstatic to receive the W.E. Manning Memorial Scholarship Award. Although he did not expect to be awarded it, he said it was a very pleasant surprise.

“It really eases the financial burden,” he said. “Every little bit helps, it helps ease the burden of student debt for sure.”

Smith’s company is also helping him return to school. His company pays $1,500 a semester for his schooling if he maintains a 3.0 GPA, enrolls in a program related to his industry, and stays with the company for at least a year after he graduates.
While Smith’s plans after receiving his degree are not certain at the moment, he knows that he wants to stay in this industry.

“I want to just continue working my way up through the water utilities industry,” he said. “I think utilities in general suit me well. And I would like to be in administration, running stuff.”