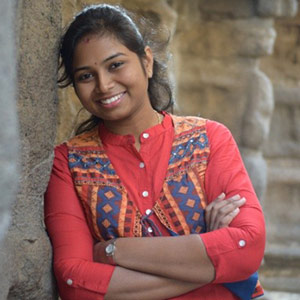 "Without hesitation, if someone asked me if they should take an online class, I would say yes, and I would recommend the U of A."

For Sree Chintalapudi, earning her online Master of Science in Operations Management degree was her ticket to financial independence.

Chintalapudi, who moved to Bentonville in 2016, has been financially dependent on her husband since 2015. She spent the money she had saved while working in India to pay for most of her operations management courses, but she needed financial assistance to finish her degree from the College of Engineering. In fall 2018, she was one of four students to receive the W.E. Manning Memorial Scholarship, and she expects to graduate in December 2018.

“I’m waiting for that day,” Chintalapudi said. “Once I complete the degree, I will get work authorization, which will allow me to work (in the United States). In this way, I will get my independence back.”

Chintalapudi earned her bachelor’s degree in mechanical engineering in India, after growing up in a community where it was not common for women to get an education in a specific field of study. Her parents considered her education important and supported her, she said.

She worked for Fiat Chrysler automobiles from August 2013 to 2015 and for Cummins India Limited from July 2011 to August 2013. During that time, she helped design an energy-efficient stove that relies only on dried tree branches, helping people in rural India.

While studying at the U of A, Chintalapudi works as a demand forecasting intern at Rockline Industries. She analyzes large chunks of data to formulate and present business insights.

“Without hesitation, if someone asked me if they should take an online class, I would say yes, and I would recommend the U of A,” Chintalapudi said. “The professors were very helpful, and it is up to the students to use the resources to get the knowledge they wish.”